[…] We give it a go, Niina and I. I take a fragment of mouth with chin. An open mouth; I push my hand through the open mouth. In ways, it is a very intimate act. A person as a frame; framing a piece. Sophie says: perform with stuff. We took photos of how Niina and I sit on chairs with Sophie’s stuff on our laps. They came out rather nicely. I posted two of the photos on Facebook. Bit of a shame really. […]

What else do we have? Return to the notes. The working title is I am here. Ah, and here are our topics of conversation from the first meeting: intestinal flora. […] It all started a year ago. I just can’t recall as to how the two of them got together - or was that detail even mentioned? They met on a regular basis. Similarities: working methods. According to Niina it’s the intestinal process that’s the driving factor. Wait, did I note that down wrong? Should that not be internal process? Intestinal is fine too. It is, after all, long, sluggish and has a procedural manner, processes material, transforms it.

At that moment I’m reminded of Rainald Götz’s book Rumlabern [prattling on] - or was it Loslabern [prattling away]? Great! Niina states her incentive to create comes from there never being enough time, or that there’s too little space. Thus, according to Niina, make as much as you can, spend as much time in the studio as you can. I’m familiar with the ‘never enough time’ issue – a mind occupied otherwise, something else smothering the artistic thought process. The phrase ‘compulsive elements’ appears in the notes. Making also leads to series: Niina works in series. […] Sophie says, “Much like in a dream, Niina reveals her inner processes by adopting several personas that appear ‘on stage’ in her pictures.” […]
Me. You. The Other. Strangers. The super-ego. ... Freud. Furthermore, “Niina’s images present a constant questioning of the self and the world, taking an almost dreamlike approach and often gazing towards a fictional camera. It is as though Niina would look at herself in a mirror only to see herself in a range of roles, all originating from personal considerations of a current condition or situation. Like monuments, her pictures can be visited, and are visible in situations that we not only have a collective awareness of, but that we can also align with our individual experience.” The ‘individual-biographical’ as a history of old? Niina paints, writes and paints on paper, vases, cartons, and makes books. I like that.

This is arduous – and its only 9:43 am. Which means I can’t go for lunch yet. How long do I really want to write for? According to time or length of text? Now I remember – the title of that book by Götz was Loslabern. Sophie talks about how she makes imprints of her body in a variety of material. The presence of the body. Traces become an image. Wasn’t Sophie once in Pompeii? Didn’t she make a project there? And did she not tell me about plaster casts of bodies? Bodies enthralled in the moment of volcanic eruption? […] Stone, plaster – the fleeting, the flowing, starkly alleged through the choice of material. A fugitive body, the traces of a figure imprinted in plaster. And repeatedly: foil, glass, latex, transparencies – something sloppy, something solid. […] Sophie keeps talking about the living body in contrast to the imprints. At what point is the body alive and when does it metamorphose into material? Somehow it is a consistent and logical next step to work using performances with people. Living bodies featuring traces of bodies, dead objects. Sophie’s artworks already have something of the performative about them; they might also be seen as the remnants of performances, at least a wee bit.

Traces of what? In Niina’s case it is life, others, and her own biography. And in Sophie’s it’s the body – what was that again. The intestine, and, again, a break. I should get a move on. Hilbert told me yesterday that I dissect everything. Intellectually that is. […] 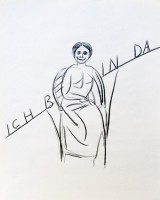 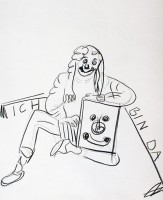